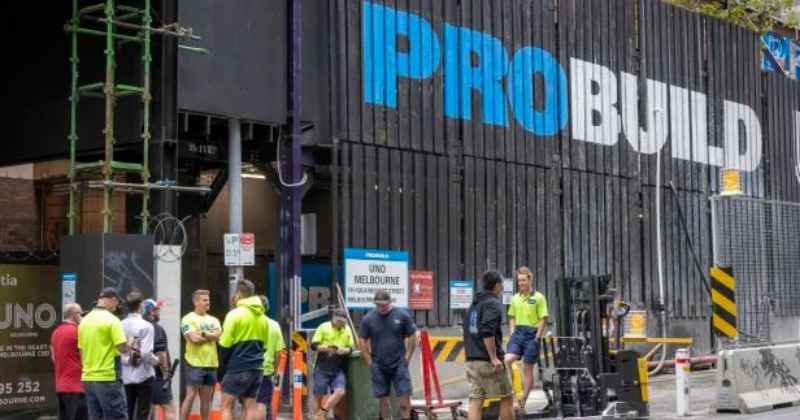 Australia’s largest privately owned construction company, Hutchinson Builders, has warned that more companies and subcontractors were likely to hit the wall as the material supply crisis shows no sign of abating.

Supply chain delays, which started in the pandemic, and massive price increases for timber and steel, exacerbated by Russia’s war in Ukraine, are pushing costs higher by 20 per cent to 30 per cent.

“In my opinion, a section of the construction industry in some parts of the country, like south-east Queensland, is in quite a mess and some businesses are unlikely to survive the dilemma currently confronting the industry,” Mr Quinn said in a message to staff.

“The demise of national builder Probuild and Queensland builder Condev is testament to the difficult and evolving circumstances in the construction industry. The trauma is deep and there are other sizeable industry businesses on the brink.”

Mr Quinn, who is stepping down as managing director in October, said the number of head contractors feeling the pinch was significant, creating an “almost-unmanageable situation” on construction timelines and cost escalation for builders and sub-contractors.

“The financial fallout is likely to be big. It’s already too late for some. There is no easy solution,” he said.

The current crisis especially hurts those builders using fixed price contracts who have no ability to pass on cost increases on timber and steel in the six to 12 months it takes to finish a project, says Paul Bidwell, Master Builders Queensland deputy chief executive.

“The only certainty is the prices keep on going up. We don’t see it ending. There is no sign of that,” Mr Bidwell told AFR Weekend. “People tried to lock in prices and they just kept on going.”

Moscow’s war in Ukraine has also affectedengineered timber products coming into Australia from Russia that added a further 25 per cent price increase this year.

Delays on other manufactured products, such as roof trusses, are also extending the time it takes to deliver projects and pushing up costs.

Last month, Gold Coast construction company Condev went into administration with debts of $33 million, while Probuild, which had $5 billion worth of projects on its books and $311.6 million-worth of trade-related liabilities last year, also went under.

Mr Bidwell said they would not be the last, saying more companies were in the firing line.

He said a builder in Central Queensland was taking a loss on every one of the 100 homes he was constructing because contracts were locked in on 2020 prices for materials.

“We get so many calls from people who are stressed. There must be many people out there cutting deals [like Oracle] or who have come to some arrangement,” he said.

Oracle Building Corporation, which trades under a number of names including Oracle Platinum Homes, has defended the $50,000 price request, telling customers it would be an “even worse” outcome for a builder placed in administration.

AFR Weekend has also been told other Queensland developers are going back to customers who have bought house and land packages off-the-plan to ask for extra money for the completion of their homes.

Mr Bidwell said Oracle had every right to ask customers for more money, saying they didn’t have to pay.

“They are quite entitled to say to their clients that the costs they have allowed is not enough and here is the evidence of that and we need to talk about contributing more to make it work,“he said.

“The owners are quite entitled to ignore the letter. That could be done in a sensitive way or a not so sensitive way.“

Queensland home buyers are covered by the Home Warranty Scheme, administered by the Queensland Building and Construction Commission, which provides $200,000 for non-completion of homes if a contract is terminated or a builder goes under.

Last September, Master Builders introduced a “cost-plus contract” to consider the sharp rise in building materials, which would leave builders less financially exposed, but the bulk of contracts are fixed-price where it is illegal to add in extra cost clauses.

Commercial contracts on bigger projects have clauses to allow for increased supply costs.

Builder-developer Jim Costello, the managing director of JAM Group which is building 80 homes at Arana Hills on Brisbane’s bayside, said rising constructions costs were affecting the viability of projects.

He said his company was less exposed because he was building for himself – and then selling to customers – rather than fixed-price contracts.

“But we are still copping the price rises,” he said. “If I was doing fixed price contracts I would be adding 10 per cent into allowances because we don’t know where it’s going to end up.”

Is a monthly mortgage really cheaper than renting?

Should I furnish my rental property?

Can I remove a Property Management company at any time?

How to ask an agent to lease and manage my property?